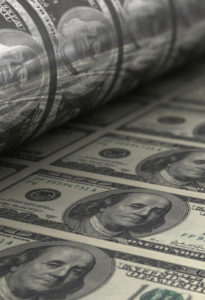 Can you imagine that you have run up the balances on your credit cards to their maximums and you call the issuer of each credit card and announce; “I have decided that you need to raise my spending limit.”

You know the response; “We make that decision; not you.” The bank, or other institution, that issues those credit cards has an underwriting department that determines myour risk and ability to pay before they determine a maximum spending limit on your card.

A responsible household manages its debt and monthly spending against its income and other sources of assets. This balancing act keeps debt from getting out of hand and assists in maintaining good relations with creditors and keeps the consumer’s FICO score, and other measures of financial responsibility, high.

This micro-economic example is replicated on a macro scale when you consider the same balancing act that the United States must go through to be responsible with tax revenues versus spending and accumulated debt. What is different is that the United States can try to borrow money to pay its debts, but as the old saying goes; “you can’t borrow your way out of debt.” This has proven to be a tough lesson for many individuals. And there is a real lesson for a country in this bit of wisdom.

Unfortunately, because of out-of-control spending by the government and a mismanaged balance sheet, the Treasury needs to raise the limit of its borrowing authority in order to pay the bills. Public debt increased during the Clinton and Bush years, but has made its steepest and largest climb during the Obama administration, where it jumped from about $11 trillion to $20 trillion. Contrast this with the rise in public debt during President Clinton’s administration, where public debt went from about $4 trillion to under $6 trillion. There were two shutdowns of the government during that time, as the budget battle waged.

While this budgetary tug-of-war goes on, Americans are mostly in the dark. The average American can understand the benefits and risks of personal money management, but the rise in the nation’s debt is a nebulous concept with little expected personal impact.

In August of 2011, the credit-rating organization Standard and Poor’s downgraded the U.S.’s credit rating from triple-A to double-A plus. Rocky budget negotiations, at the time, persuaded the organization to take its rating down a notch. This was a first for the U.S.’s credit rating, since the treasury bond has enjoyed the status of being the crème-de-la-crème of safe debt instruments. The rating has allowed the U.S. to borrow at lower rates because of the reduced risk to investors.

The U.S. has maintained it highest rating from the two other credit issuing agencies. But, once again, the Congress is in the position where it has to make a decision to raise the debt ceiling. Without that bigger wallet to draw from, things like contributions to federal retirement funds may have to be postponed.

This is one area where the debt ceiling and personal finances intersect. A nebulous concept then becomes very real.