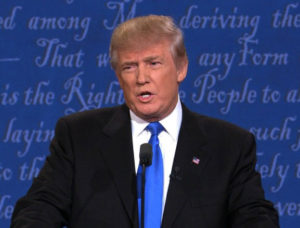 On November 8, 2016, University of Pennsylvania finance professor Jeremy Siegel told CNBC “I wouldn’t be surprised to see 1,000 points on the Dow,” meaning a 1,000 point drop resulting from a Trump win. “Trading in S&P 500 futures contracts actually had to be halted overnight after plunging more than five percent when it became clear that the real estate billionaire and reality TV star would become the 45th president of the United States,” said Time Magazine.

The November 9, 2016 Time article went on to say “The Brexit result was a real shock and created instability in theU.K.,” said Green. “But this is a far bigger deal as this creates instability on a much wider, international scale,”quoting Nigel Green, CEO of the deVere Group; a financial consulting firm.

The article, titled: “The Dow Could Fall 1,000 Points After Trump’s Upset,” reflected the hysteria of many on Wall Street where Hillary Clinton was the darling of big investment banks. Trumps win was seen as a catalyst for instability, a condition that is poisonous for the stock market. But, what really happened?

Trump’s policies, stated on the campaign trail, are friendly to American business. Those initiatives include putting less burdensome regulations on corporations, spending on infrastructure, reducing the corporate income tax and creating incentives for keeping jobs in the U.S. In the hysteria leading up to the election, and following the results, many of the prognosticators had missed what was obvious. A business-friendly president should be a catalyst for a positive movement in the markets; not the other way around.

By December 7, less than a month post-election, the Dow was up over 1,200 points. Quite a contradiction to the naysayers. If investors had listened to the dismal rhetoric, coming from many of these pundits, they would have sold off ahead of an impressive rally. There is a lesson to be learned. By December 22, the actual increase amounted to a $1.8 trillion paper profit. Yet, according to USA Today, only 52 percent of Americans participated in the gains. That number is based on a poll taken in April 2016 of those who were invested in the market. At that time, this represented the lowest stock ownership rate in 19 years.

There is a difference between investment commentary, based on technical or fundamental indicators, and basing  commentary on a simple dislike of a politician. This clouds the objectivity of a person whose comments can move the market. The rally was based on market psychology and optimism that resulted from policy changes articulated during the campaign. Policies that are business-friendly and represent an economic stimulus in nature, could potentially spur the markets.

Many investors left the market after the financial crisis. Stock market participation peaked in 2007 at 65 percent. With a government that is more friendly to business, time will only tell if investors will be rewarded in this new year and return to the market.

The combination of slow economic growth in recent years, combined with the sour taste left over from the stock market in 2008, may mean that fewer investors will participate in any additional rally, unless the new president can convince them otherwise.

By November 22, in a CNBC interview, Professor Siegel conceded of the stock market’s surge; “it’s a hundred percent Trump as a rally.”