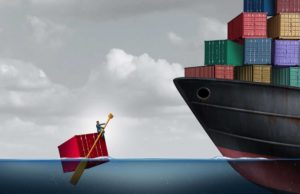 The trade deficit is a measure of the amount of goods and services the U.S. imports versus our exports and how much more imports exceed those exports.

The deficit has been a major focus of the new administration, with a “made-in-America” theme, and the repatronizing of international company profits as goals in the coming years. As an incentive to place more of those manufacturing jobs in the U.S., for American-based companies, there has also been discussion of making it more expensive to manufacture goods outside of the U.S.

Another factor that plays into the equation is the strength or weakness of each country’s currency. When the dollar is strong, the cost of U.S. exports becomes more expensive in markets outside the U.S. Twenty-sixteen saw the deficit hit a four-year high, totaling $502.3 billion for the year.

President Trump has suggested imposing a 45 percent tariff on Chinese goods, since many Chinese trade policies, along with purported currency manipulation, can artificially make Chinese products cheaper to import. Products like cold-rolled steel have been sold at prices lower than cost in the U.S. This has made competition difficult for U.S. manufacturers.

In a world economy, there must be an even playing field to facilitate fair trade between nations. When one country manipulates the elements that effect fair trade, it claims an unfair advantage. This continuing deficit scenario plays into many economist’s forecasts and has some residual impact on the market, especially for institutional investors. The U.S. has not enjoyed a trade surplus since the mid-1970s.

In the meantime, the promise of cutting regulations and corporate taxes and imposing steeper tariffs may stimulate a new resurgence of growth for American manufacturing that would cut the trade deficit and benefit American companies over time. One of the only sticking points is that U.S. wages are much higher than the wages paid in emerging economies and in China. Also, negotiations would have to find some mutual benefits to avoid a trade war.